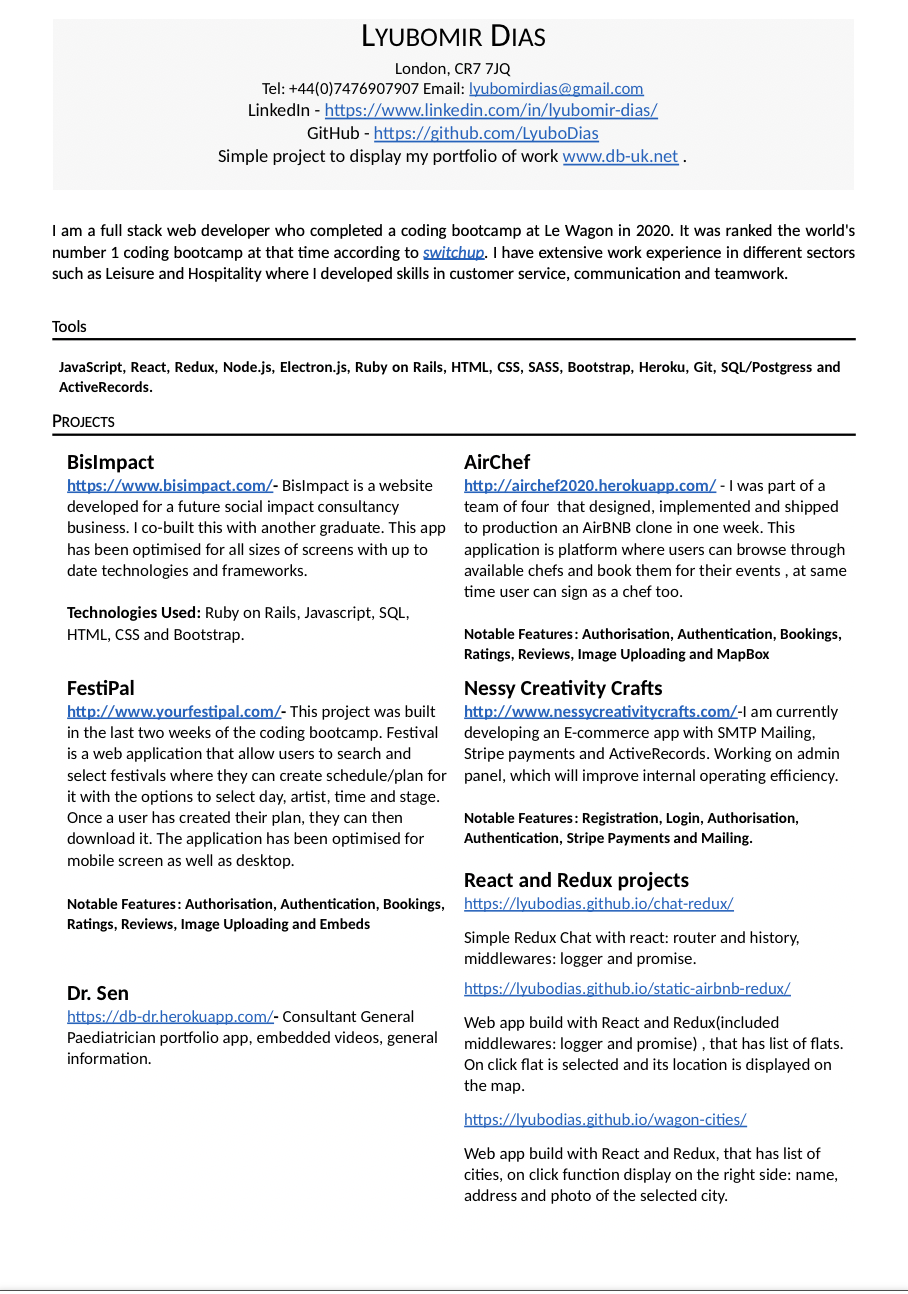 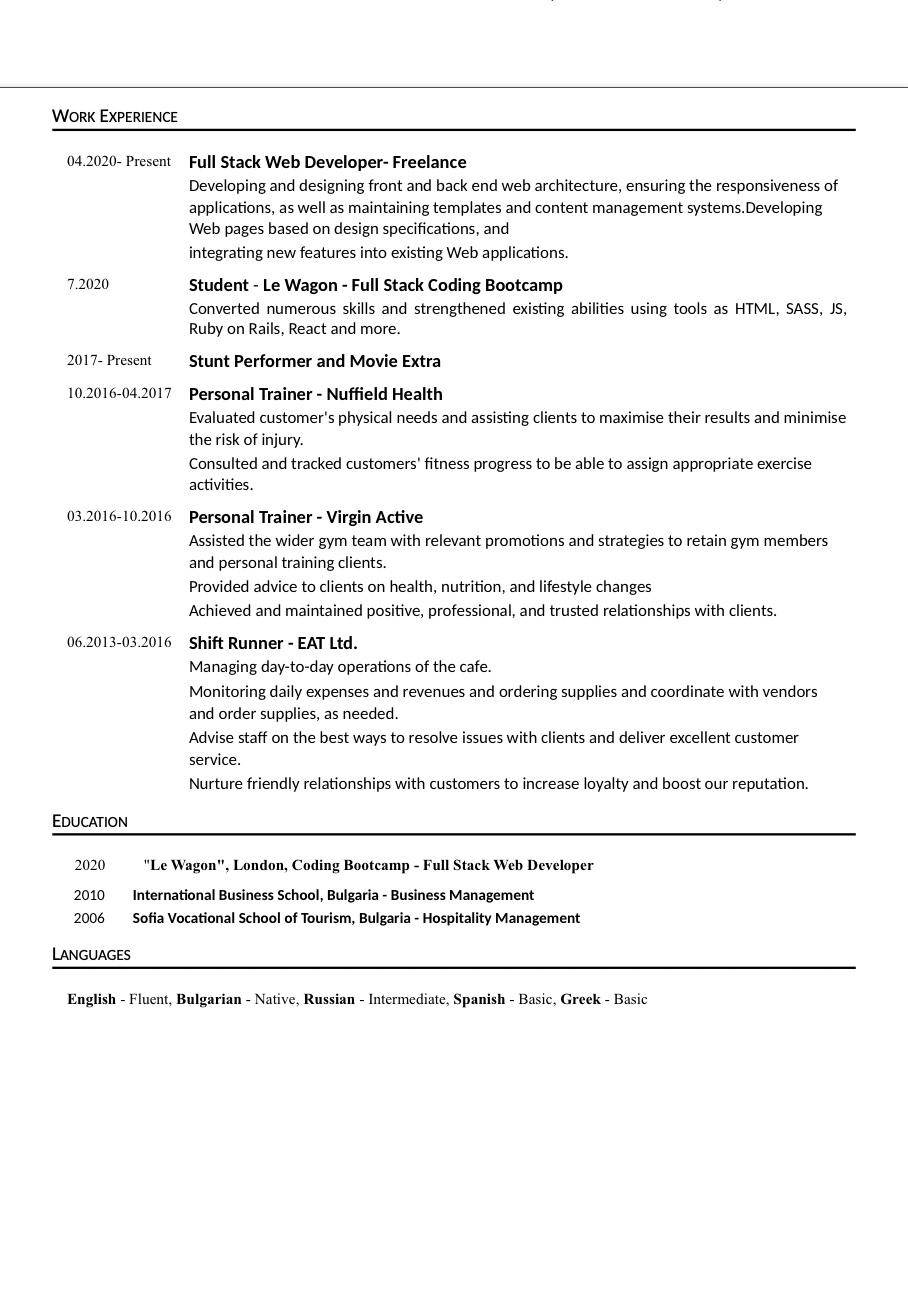 My name is Lyubomir Dias , a Full Stack Web Developer


I have completed Le Wagon, the #1 coding Bootcamp in the world in 2020. My technical skills include using software such as Sublime, VSCode, Programming languages such as JavaScript, Ruby on Rails, HTML, CSS, and React. I have worked with Operating Systems that include UBUNTU, Mac Os, and Windows. My objective is to create and maintain optimally functional websites and applications. My experience enriched my understanding and skills in web development by working with projects across widely varied niches. One of my goals includes constantly improving my expertise in web development. 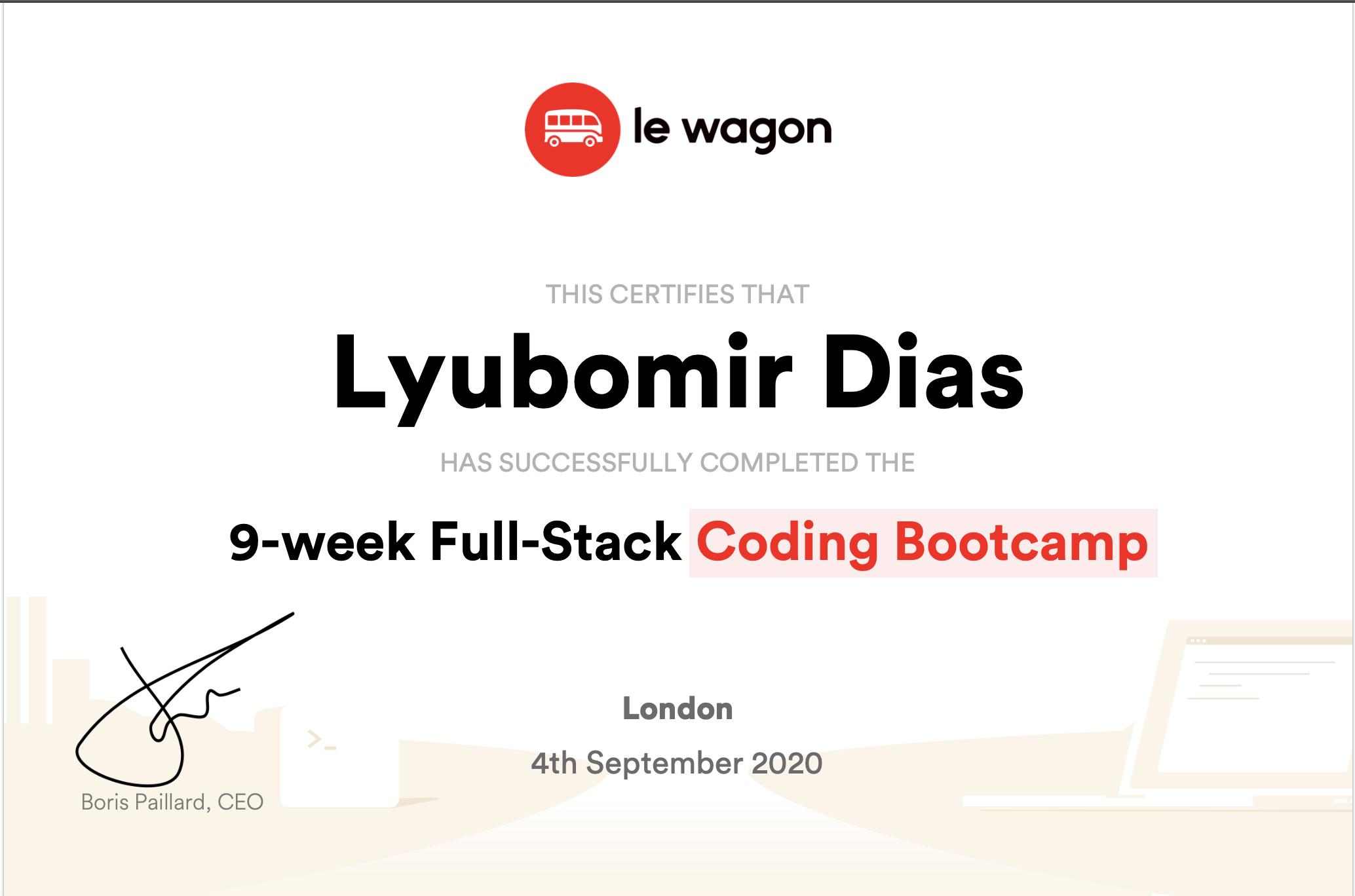 
I am passionate about Sports, Tech, and Travel, and have an educational background in hospitality and business management. After I graduated from my education in Bulgaria, I worked in a variety of roles including being a Personal Trainer and a Movie Extra. Whilst these were roles that I enjoyed, I have decided to follow my bigger passion of working in technology. Started my journey at the beginning of 2020, and since then I`m very passionate and excited to work on new projects.At the moment I`m still coding and learning daily.


Click and drag anywhere on the grid to place police officers,
when you ready press "Get the money!" and see if the thief would manage to reach the cash.
( powered by Dijkstra )

I was part of a team of four that designed, implemented and shipped to production an AirBNB clone in one week. This application is platform where users can browse through available chefs and book them for their events , at same time user can sign as a chef too.

In this project, I was working on styling various pages, and mainly working at the front end. I worked on styling and the functionality of the searching bar where users can filter chefs by location and cousins. In beginning, we have used video as a banner but removed it later on for a better user experience.

This project was built in the last two weeks of the coding bootcamp. Festival is a web application that allow users to search and select festivals where they can create schedule/plan for it with the options to select day, artist, time and stage. Once a user has created their plan, they can then download it. The application has been optimised for mobile screen as well as desktop.

We worked on this project for about 10 days. My work included front-and (styling most of the pages: background, font, responsiveness) and back-end (I did the review feature where users can leave a comment and star rating).

Embedding social media shortcuts reflectin the festival that the user chooses, I have done the social media links, and used JS to add dynamic text on the main page. I did the rating and comment section as well as styling it. I have added a magnifying glass to the map photo. 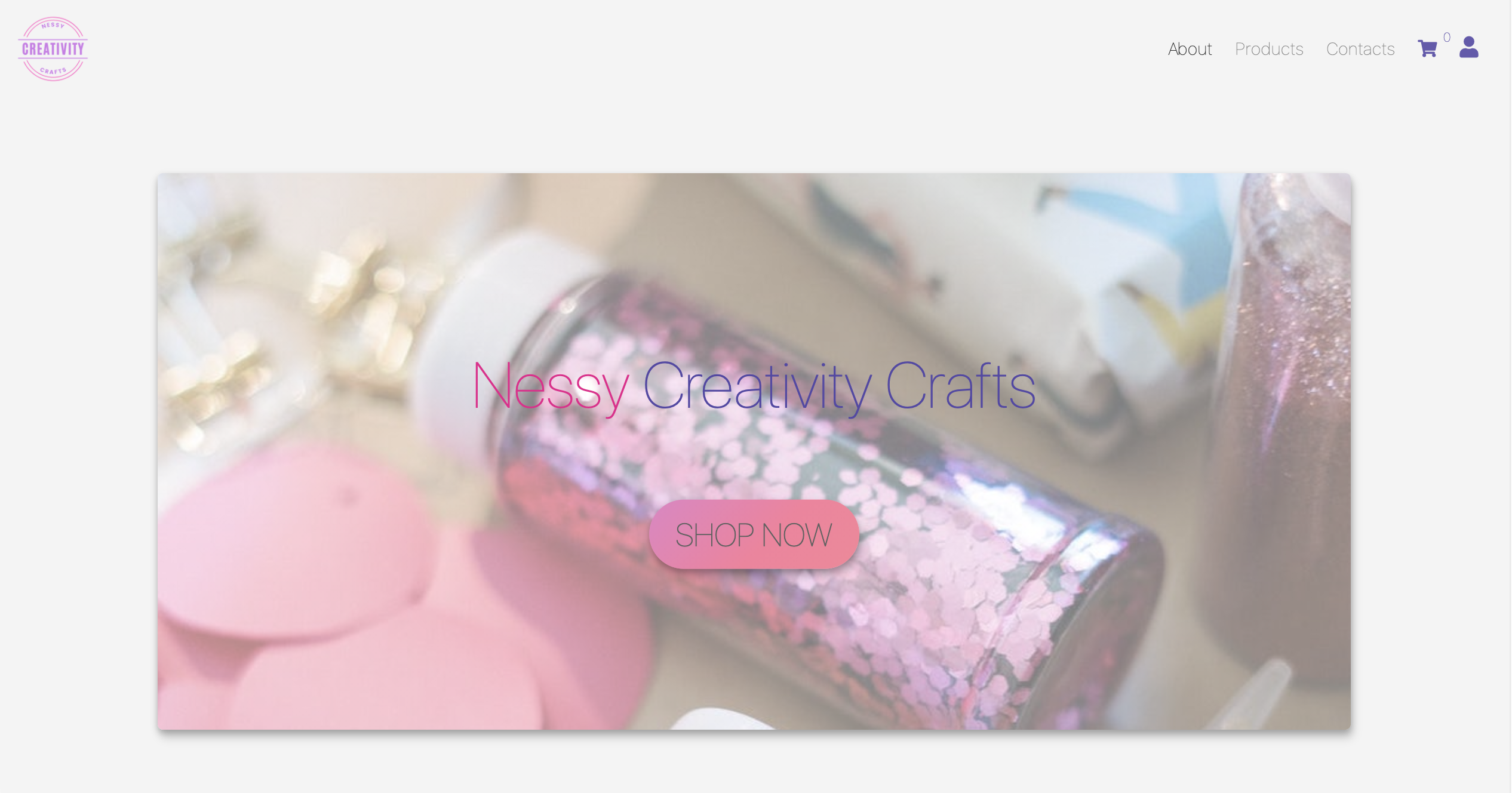 I am currently developing an E-commerce app with SMTP Mailing, Stripe payments and ActiveRecords. Working on admin panel, which will improve internal operating efficiency.

Building E-commerce, where the user will be able to log in, search through available items, filter them, save in basket, SMTP Mailing and make a Stripe payments.

BisImpact is a website developed for a future social impact consultancy business. I co-built this with another graduate. This app has been optimised for all sizes of screens with up to date technologies and frameworks.

Website that works as a portfolio to showcase the work of Consultant General Paediatrician-Dr. Sen, and share general information with patients. The website also include courses and links to videos that are focused to prepare doctors for exam that need to be taken to be able to work into the UK.

Proffesional clean design, easy access to the menu and all information.

Why and When should you use React with Ruby on Rails


Why did these people end up choosing React with Ruby on Rails?

Reduced server response time — The speed of your website/web app matters. A slow-loading app can be a business-killer. Companies have been shown to reduce their server response time up to 90% using the combination of Ruby on Rails and React.
Anyone would know how important web performance is for eCommerce SEO. Before using the power of Ruby on Rails with React, the median response time was 1100ms which dropped to 120ms. This translates to better user experience and more conversions.
This improvement was achieved using React on Rails Gem developed by Justin Gordon. You might argue why not use Rails/webpacker? It lacks server rendering, which is super important for UX and SEO.
Cut down Memory usage — Egghead.io experienced a lot of timeouts in every hour, and they seemed to be clueless about it. After deploying React with Ruby on Rails, there were marked improvements in memory usage and response time.
Development speed, quality & business model — When your biggest concern is time to market, Rails combined with React works wonders. If you are looking to build something based on the freemium model, Rails works amazing. You might have to scale sooner but the revenues will take care of this.
Another great aspect is if you are testing waters, you will get to success/failure a lot faster to make appropriate future decisions. On the contrary, if you are contemplating earning from ad revenues and have a huge base of free users, Rails will probably not go with React here.
Low learning curve — If you are building a prototype and short on time, both these technologies work magic. It’s easier and faster to ship your MVP with Ruby on Rails with React. Use RoR for the back-end and React for the front end creating interactive UIs.
Enjoy stability — RoR is backed by a fantastic community and there are gems for what not. React comes from Facebook and the APIs don’t change much. So, you can expect your app to have a stable release.


I, honestly, feel it is more about what one is comfortable with. Sure, one has to take into consideration the community, future developments, how long a framework/technology has been present. Ultimately, it boils down to how you use the tech-stack to make your users happy. When you are building and scaling large web applications, definitely, you need to take into account the above-mentioned things and see what deems to be right for your business and users.